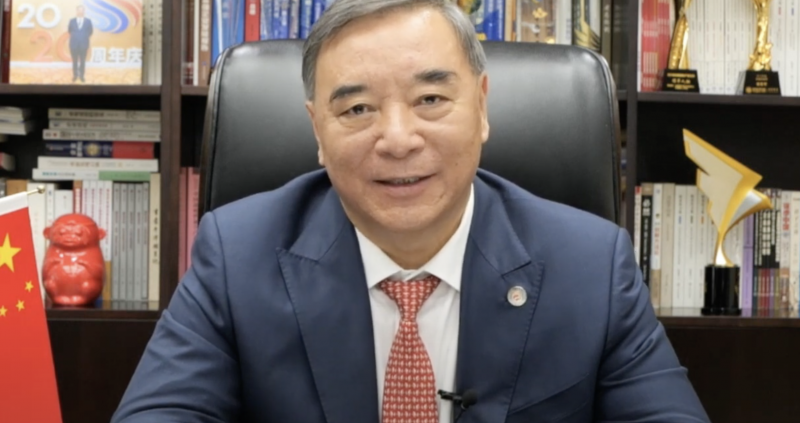 SONG Zhiping, President of the World Cement Association (WCA), urged the global cement industry to continue its efforts towards carbon neutrality, and also to advance digitalization, in a keynote speech at the WCA Open Day earlier this month.

Mr Song looked to the future, identifying two overriding priorities for the industry, the first being carbon neutrality. As he explained, CO2 emissions can be reduced through three key measures: reducing clinker factor, and decreasing fuel and power consumption.

‘I call on cement plants in all countries and regions, all WCA members including cement manufacturers, design and research institutes to make joint actions to reduce carbon emissions,’ he said. ‘The task is challenging, but I am confident that we can do it well.

With regards to decarbonization, Mr Song drew attention to WCA member Anhui Conch, who have installed CCUS facilities at their Baimashan plant, near the Yangtze river, in eastern China. The project separates and purifies 50,000 tonnes of carbon dioxide each year, which Conch sell to industrial consumers.

In addition, CNBM have recently started to use CO2 emitted from cement plants to nourish plants in greenhouses, as an alternative way to cut carbon dioxide emissions.

As a second industry priority, Mr Song emphasized the importance of boosting the implementation and application of digital and smart technologies.

‘The second priority for the industry is to advance digitalization…Thanks to the ongoing technological progress, the cement industry has transited from automation to digitalization. Application of digital and smart technologies has helped to decrease manpower, make operation more accurate, improve quality and lower costs,’ he said.

Mr Song highlighted CNBM’s operations in Tai’an, Zunyi and Zhejiang, where the company has applied new technologies that contribute to CO2 emissions reductions for three newly built lines. He also noted that digitalization had transformed the company’s sales, which are increasingly online.

Reflecting on what has been a very difficult year for the economy, Mr Song highlighted global cement volume, which stands at 4.1 billion tonnes, nearly equal to that of 2019.

The WCA, in turn, made progress, welcoming more members and climate partners over the past year, furthering the development of the association and launching a number of new digital initiatives including networking, webinars, knowledge sharing and member forums.

Mr Song also praised WCA members for coming together and showing unprecedented solidarity during the pandemic, including donating masks to cement companies in the most affected countries.