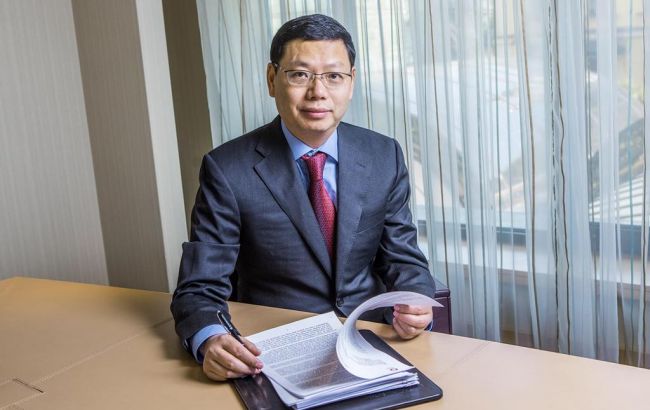 Last week, the Verkhovna Rada passed in the first reading the government bill №3658, prepared on the basis of a memorandum with renewable energy producers, the essence of which is to reduce the “feed-in” tariff for existing and future projects and a number of other changes.

Market participants claim that most of the innovations that worsen their situation relate to solar power plants, although the memorandum was signed only by associations representing the interests of wind turbine projects.

One of the largest players in the SES market of Ukraine – the Chinese state corporation CNBM – also did not sign the document because it considers it discriminatory.

Jason Zhang, Chairman of the Board of CNBM International Corp., told RBC-Ukraine about the reasons for this decision and his further actions.

– Just a few weeks ago, in an interview with our publication, your colleagues said that CNBM, despite the volume of investments in Ukraine and the capacity of your stations, did not invite to negotiations on a memorandum with the government. Apparently, the situation has changed little, because you did not sign the document.

– In our practice, this is probably the first time we have encountered such a persistent and uncompromising disregard for one of the key players in the renewable energy market of Ukraine. We were not invited to the previous meetings or to the preparatory talks from the final text of the memorandum. At the same time, our own initiatives also almost always ended in silence on the part of the government and the relevant ministry. Our letters went unanswered, and meetings with representatives of the ministry, organized with great difficulty, at which we expressed our position on the illegal and discriminatory reduction of tariffs, also proved to be ineffective.

– The memorandum and the bill contain exactly the rules for reducing the “feed-in” tariff, which were opposed. Why did this happen?

– In fact, the most controversial points remain in the document, which we consider unfair and which will hit our objects more than others.

First, the bill provides for a 15% reduction in the tariff for all solar power plants with a capacity of more than 1 MW, which are commissioned by 2020. This is justified by the equal approach to all investors.

However, for our companies the tariff has already been reduced in 2015 by 44%, ie there is no equal approach from the very beginning

Secondly, in the text of the memorandum, in the official statements of the authorities, the cause of the crisis is clearly stated – the uncontrolled growth of RES generation in 2018-2019. However, our company has not put into operation more than one new kilowatt of power since 2013. Not to mention that the cost of equipment in the years when we bought and installed it was many times higher, and accordingly, the return on investment is much longer. That is, they want to solve the problem through those who created it.

– What, in your opinion, are the reasons for this format of the document?

– Even the naked eye can see that the memorandum defends the interests of only one part of the market – wind farms. At the same time, the pressure on solar projects is enormous. For example: the marginal tariff is set only for SES, wind farms there is no separate marginal tariff – that is, tariffs for all SES will be reduced by 15%, and tariffs for “old” wind farms (until 2017) will not be reduced; reduce liability for imbalances for SES prescribed with an error of 5%, and for wind farms – allowed 10%; for SES pre-PPAs are abolished, for wind farms they are kept (pre-PPA is a tariff fixation that avoids auctions) We did not have such benefits – we do not have pre-PPA, so we are outside observers here. Given all these factors, it is not surprising that the document was signed only by “wind” associations.

– How does your shareholder react to the situation and how is he going to build his strategy for further work in Ukraine?

– The issue should be divided into two parts.

The first is a tactical response to the current situation. You know that the Chinese government is behind us, so it is quite logical that the Chinese Embassy in Kyiv is fully aware of what is happening and keeps an eye on the pulse to inform the relevant ministry in China. After the initiatives to re-reduce tariffs (for us), which will result in an overall reduction in their level by 60% compared to expectations, the embassy sent a letter with a detailed description of the situation to the Ministry of Energy.

We are ready for a compromise solution, but it must be fair and based not on virtual “common” approaches, but on non-discriminatory principles.

The second part is a big long-term strategy to work in the markets and invest in the growth of renewable energy. I will not reveal a big secret if I say that investments come to countries with a stable legal framework and transparent conditions of the game.

CNBM has invested about several hundred million US dollars in Ukraine in the form of equipment and commodity loans, but a few years ago it was ready to invest another $ 2 billion, not only in RES, but also in the coal industry and energy engineering. But first we received a voluntary decision to reduce the tariff by 44%, then there were attempts to raid our facilities, now we see a new initiative to reduce tariffs while investors were promised their invariability until 2029. All this deprives investment in Ukraine of any meaning.

– What steps does the shareholder and the CNBM representative office in Ukraine plan to take if the initiative of the Ministry of Energy is finally supported and enters into force as a law?

– If no compromise is found, we will defend our legitimate interests in international bodies. We are a large state corporation and we have enough time and resources to bring this process to a logical conclusion.

The Government has signed a Memorandum with producers of “green” electr...